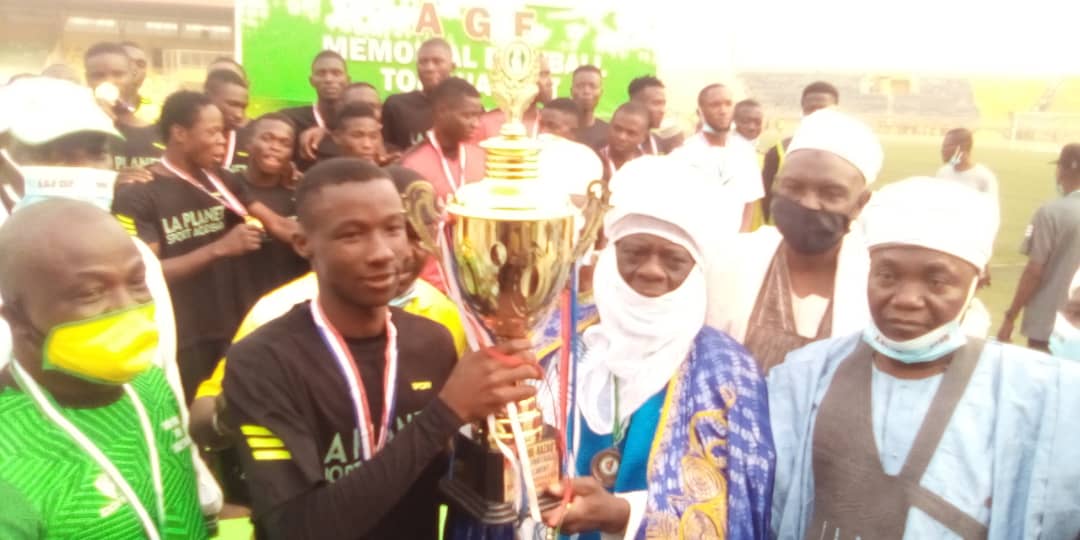 La Planets Sports Academia have emerged champions of the AGF Memorial Cup after defeating Harmony FC by a lone goal in the grand finale of the tournament.

Afeez Ajao’s cool strike in the 28th minutes was enough for the Coach Paul Mohammed led side to win the coveted trophy organised in the memory of AGF Abdulrazaq, the father of the Executive Governor of Kwara State, Mallam Abdulrahman Abdulrazaq.

Harmony FC were not in their best form in the match as they struggle to create goal chances and match up with thier opponent’s drive.

In his remarks, the Emir of Ilorin, Alhaji Dr. Ibrahim Zulu Gambari CFR, who was represented by Daudu of Faagba, Alhaji Suleiman Alabi applauded the organizers of the tournament for the initiative.

While praying to Almighty Allah to repose the soul of AGF Abdulrazaq, he described  the football competition as one of the best way of reminiscing his positive impact and legacy as the first lawyer from the Northern Nigeria, whose immense contributions to development of Ilorin Emirate, Kwara State and Nigeria will forever be cherished.

Speaking after the game, Coach Paul Mohammmed of La Planet lauded his boys for their performance even as he noted the need for improvement upon the background of their wastefulness in front of goal.