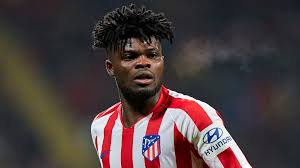 Black Stars of Ghana and 2020 Fatih Karagümrük defender Joseph Attamah Larweh says it is time for Thomas Partey to test himself in another league – preferably at Arsenal.

Partey, who has also been linked with Manchester United and Liverpool, has been a key figure for Atletico Madrid this campaign and is expected to be in demand this summer.

The defensive midfielder is contracted to Atletico until 2023 but is believed to have a €50million (£44m) release clause in his contract.

And the 26-year-old international teammate Larweh has advised him to make the switch.

“I will be happy if he goes to Arsenal,” said Larweh on Citi TV, in quotes reported by Mundo Deportivo.

“He has done everything at Atletico and is recognized as one of his best players.

“He needs people to know that he is capable of succeeding in other places and not only in Spain.”

Another of Partey’s Ghana teammates Kasim Nuhu, last month urged him to jump at the chance of a move to the Premier League if a top-flight club triggers his buyout clause.

“The two teams always make the same category in the league, fighting for the third and fourth place to play in Champions League.

“But as we all know the Premier League is the best league in the world so if he joins Arsenal I will be happy for him.”

Last month it was reported that Atletico were interested in offering Partey to Liverpool in a swap deal for Alex-Oxlade Chamberlain.

Ronaldinho speaks on house arrest after release from prison