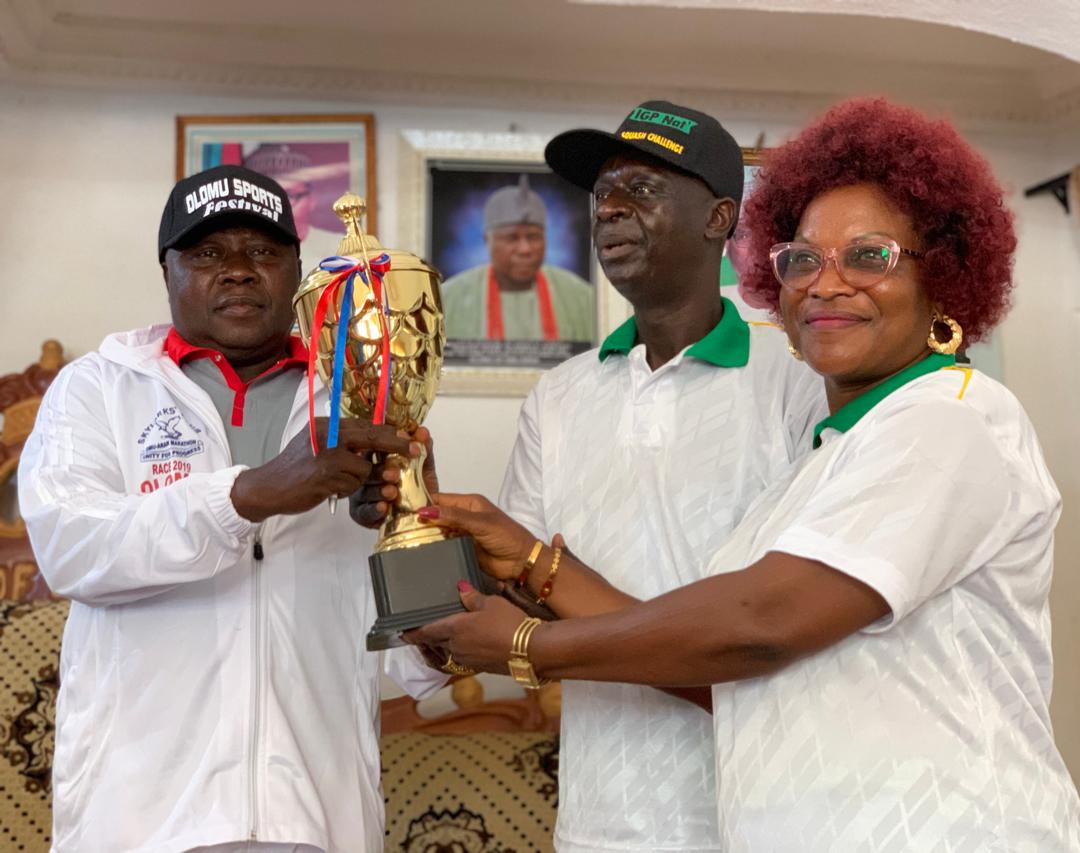 History was made last Wednesday, as curtain was drawn on the maiden edition of the Olomu Sports Festival at Irepodun Local Government Mini-Stadium, in Omu-Aran. The festival, which raises hope for oneness and unity, may have re-laid a new foundation for sports development in Irepodun Local Government and its environs, following the huge impact it made. The festival also succeeded in bringing to the limelight, the existence of the mini stadium, which was being used for parades during independence.

35 schools and Federal Constituency schools in and around Irepodun Local Government participated in the festival which was mainly for athletics events, with Monimak Global Foundation also seizing the opportunity to lay the foundation for the introduction of baseball and softball game to the communities in the Local Government, as well as other Local Governments.

In his speech at the colourful ceremony, the state Governor, Mallam AbdulRahman AbdulRazaq said that the mini stadium will be upgraded to a Sports Centre, to give credence to the enthusiasm displayed towards the development of sports at the grassroots.

The Governor, who was represented by the Chairman of the Kwara State Sports Commission, Mallam Bola Mogaji thanked the Olomu Efon II, the Olomu of Omu-Aran, Oba TPL AbdulRaheem Oladele Adeoti for contributing his quota for the development of sports in the state.

Mogaji said the Commission will do all it can to ensure the Olomu Sports Festival is sustained, as an annual event.

He reminded the gathering how numerous athletes were discovered at the grassroots level across the country in the olden days.

Mogaji, a former national squash player himself, told Oba Adeoti that the Commission will soon write the community to provide an Office for one of his officers who is expected to scout for athletes in Kwara South Senatorial District.

Earlier, the Olomu of Omu-Aran had appealed to the Kwara state government to help construct the Irepodun Local Government Area mini stadium, for the purpose of development of sports.

Oba Adeoti, who described sports as a unifying factor, said that if the mini Stadium is constructed, it would improve sporting activities in Irepodun local government area of Kwara.

He thanked Commission and by extension, the state government for supporting the Olomu Sports Festival, which the Traditional Ruler believed was capable of producing athletes for the state.

He said that sports plays a major role in enhancing the prestige and status of a country at international level, as he added that it also helps in the process of national integration and cohesion, youth empowerment, job creation and foreign direct investment through professional sports.

Oba Adeoti pointed out that government alone cannot promote and develop sports without the private sector or community development, as obtainable in other climes where talented athletes are adopted by corporate bodies grooming and sponsoring them to competitions.

The Monarch described the Olomu Sports Festival as a veritable tool to develop sporting activities within the sub-Local Government Area called Irepodun.

“Sports has gone beyond recreational activities but now a fully fledged profession. The old sports parlance says “catch them young”, and that’s exactly what Omu-Aran community is doing’, he added.

He commended Mrs Monisola Makanjuola for her role in making the festival a success.

Major steps towards the introduction of baseball and softball were taken by Mrs Monisola Makanjuola, through her Foundation, MoniMak Global Foundation, with the demonstrations during the finals of the Olomu Sports Festival.

Mrs. Monisola Makanjuola said that the demonstration was an opportunity for her Foundation to break new grounds, especially on the backdrop of her intentions to introduce the game to the community.

The member of the Kwara State Sports Commission and Board member of the Nigeria Baseball and Softball Association (NBSA) also pledged to pick up from there, to organize training for Games Masters and Games Mistresses, in a bid to fully bring the game to the community.

“Its just an opportunity. I thank God that the Olomu Sports Festival came up, and when I heard of it, I said this is an opportunity for me to bring baseball and softball here, because I already had it in plan to introduce the game to Omu-Aran and Irepodun in general.

“I requested for time for demonstration from the Organizing Committee, which was accepted. Its just to let them know that we are coming , and to prepare the Games Masters, Games Mistresses and their schools that we are coming back to train them on what we demonstrated, and to tell them more about baseball and softball”, she added.

The Chairman of the Omu-Aran Development Association (ODA), Major General Olayemi Lasisi Abidoye (rtd), who expressed delight with the enthusiasm shown by the youth, lamented the lack of sporting facilities, especially in schools, adding that the association will make efforts, within its capacity, on construction of facilities.

The Chairman of the Local Organizing Committee of the festival, Hon, Olawuyi Bidemi said that the community shared in the vision of the Olomu Sports Festival, and also pursued with vigour, the realization of such an idea. He commended all those that made the dream possible.

The idea of Olomu Sports Festival was conceived by the Olomu himself, supported by the Olomu-in-Council, and powered by sons and daughters of Omu-Aran community.

This was burn out of his passion to make bold marks, accompanied by the willingness to create opportunities for the teeming youths to be useful and relevant.

The festival no doubt, showcased the talents abound in Irepodun, and it, as well, laid a solid foundation for friendship and unity that that will bring peaceful co-existence that seems elusive in the society.

Omu-Aran High School emerged the champion of the maiden Olomu Sports Festival. The school came first with four gold, one silver and one bronze medals, in the senior category.

Mrs. Monisola Makanjuola, who is representing the professionals on the Kwara State Sports Commission board, donated a trophy for the overall winner of the Olomu Sports festival.

Importance of exercise stressed at Ilorin Mega Walk Out 2021