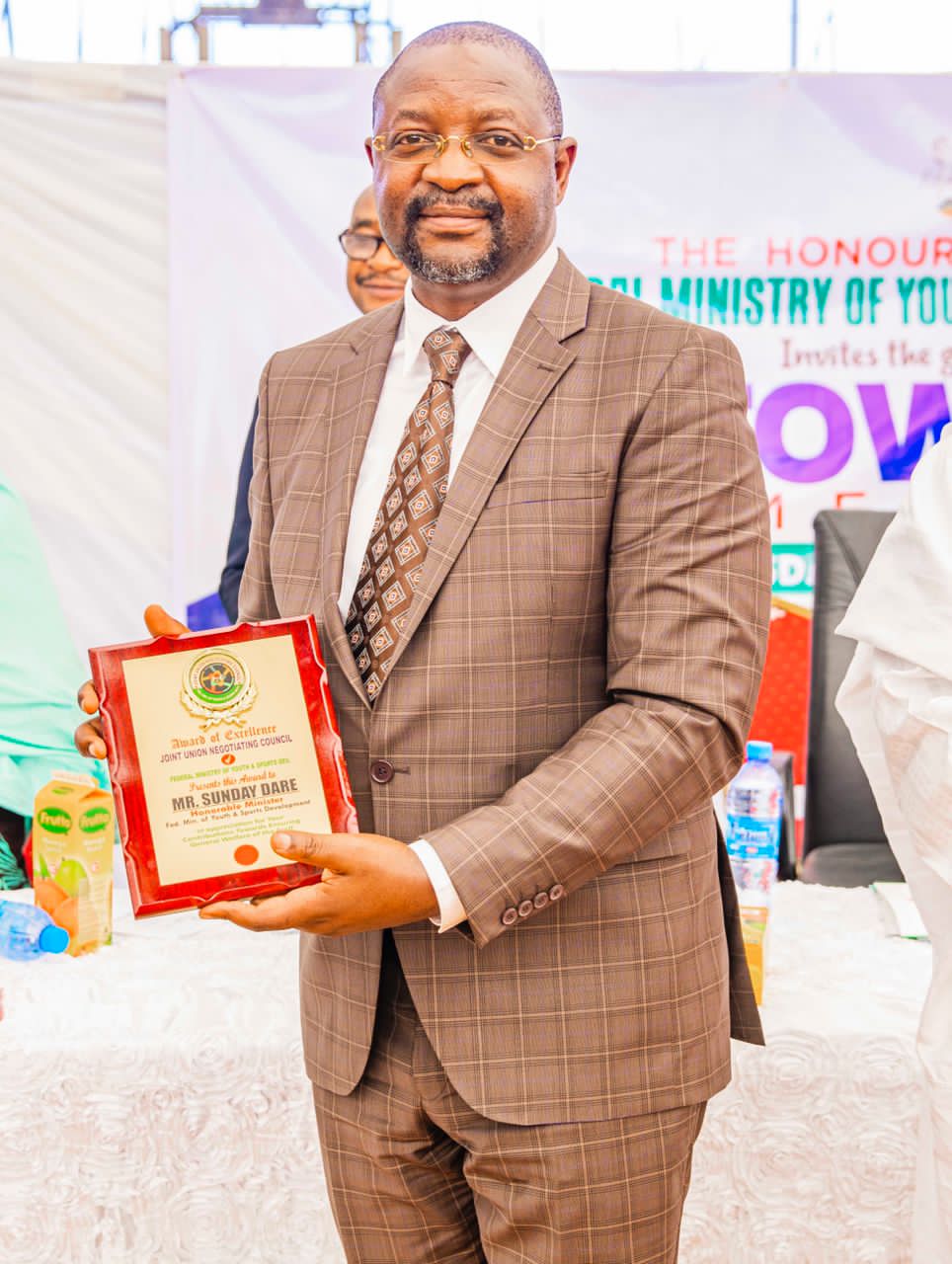 The Minister of Youth and Sports Development, Sunday Dare today saluted the tenacity and hard-work of staffers of the Ministry, stating his achievement over the past two years wouldn’t have been possible without their cooperation.

Speaking at the Town Hall meeting organiszed for staffers of the Federal Ministry of Youth and Sports Development, Dare lauded the commitment of the rank and file and the steadfastness of management led by the Permanent Secretary, in bringing to fruition initiatives and programmes conceptualized upon his ascendancy.

“I believe sometimes a chain is only as strong as its weakest point. So the work I’m able to achieve as a Minister is made possible because there is a cleaner somewhere, who cleans my office, religiously everyday.

“The Permanent Secretary is able to do his work because junior officers treats the file, and it comes up through the ranks, until it gets to his office”.

“As a Director, if your Assistant Director or Principal Officers under you do not do their work, you cannot direct. And as a Minister, unless I have everyone on that chain, either at the weak points or at the strong points doing their job, I cannot achieve, so it is a sum total, when it comes to leading any Ministry, moreso, the Ministry of Youth and Sports Development”, Dare buttressed.

Reeling out achievements of the Ministry, the Minister listed the N75bn Nigeria Youth Investment Fund (NYIF) spanning 2020 to 2023, the re-classification of sports from recreation to business, the devotion of N188bn for Youth and Sports Development, N60bn and N88bn respectively, in the new National Development Plan (2021-2025) as major highlights.

In his remarks, the Ministry staff’s union leader, Musa Abba expressed gratitude to the Minister for making welfare of staff a priority since his assumption of office.

“Just yesterday, we got alert of Christmas bonusses for us. Indeed, it came early and we are grateful to the Minister for the kind gesture and innovations he has brought to bear on the Ministry, since his assumption of office”.

In recognition of Dare’s giant strides, the union leader led the staffers to confer an award of “The Best Minister of the Year” on the Minister, assuring him of their continued unalloyed support through his tenure.