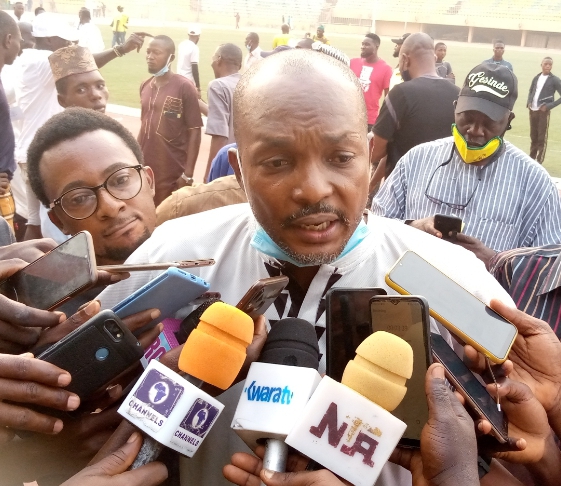 Despite retaining the top spot on the Nigeria Professional Football League (NPFL) table after a one-all draw with Wikki Tourists, Coach Abdullahi Biffo of Kwara United FC believes his team is still an underdog in the title race this season.

Speaking to newsmen after Kwara United FC forced Wikki Tourists to a draw in the crucial encounter decided at the Abubakar Tafawa Balewa Stadium this evening, Coach Biffo commended his boys for sharing the spoils with the Giant Elephants.

He said that his team will continue to fight until the last whistle of the season, irrespective of the toughness of the challenges in the system.

The homers, who enjoyed a larger percentage of possession throughout the encounter, scored their goal in the 38th minutes through Chinedu Udeagha, who converted from the charity spot, after their attacker was fouled in the box.

Wikki Tourists underscored their determination to win the game by creating several chances that kept goalkeeper Dele Aiyenugba absolutely busy throughout the game.

Kwara United had a clear chance of taking the lead minutes before conceeding the goal, when rampaging Michael Ohanu found an unmarked Stephen Jude in the box, but Wkki Tourists had goalkeeper Stanley Nwabali to thank for saving his goal bound shot.

He also stopped Jude’s low header on the goal line minutes later, to ensure Wikki Tourists ran away with the goal advantage at interval.

Kwara United introduced Olawale Farayola and Kalu Nweke, both of whom replaced Wasiu Alalade and Kamaldeen Sikiru respectively, in the 58th minute, and the changes raised the stakes for Kwara United, as they stepped up their search for an equalizer.

Coach Abdullahi Biffo completed his changes in the 72nd minute, bringing in the trio of Alao Danbani, who replaced Ohanu, Murtala Lawal, who replaced Mohammed Aliyu, and Jibola Adeleke, who replaced Stephen Jude, and also made his introduction count, scoring the equalizer in his first touch, in the 83rd minute.

The Club’s Secretary, Mallam Hamidu Olowo, who led the team to Bauchi commended the players and the technical crew members, for rising up to the challenges, especially, when it mattered most.

Mallam Olowo, who motivated the players for their efforts, challenged them not to relent, as there are more matches ahead in the season.

Kwara United FC will host Heartland FC of Owerri in their next fixture next Sunday in Ilorin.