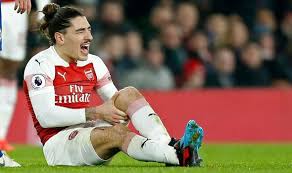 Arsenal manager Mikel Arteta says he cannot dwell on Wednesday’s 3-0 defeat at Manchester City as he has to focus on getting his starting line-up ready for their next Premier League game on Saturday after seeing two players injured and one sent off.

Midfielder Granit Xhaka picked up a knock early in the match and centre back Pablo Mari sustained an Achilles problem later in the first half. David Luiz, who came on for Mari, was sent off in the 49th minute after conceding a penalty.

“We have to see who we have available to get that starting 11 after the injuries we got tonight,” Arteta, whose side visit Brighton & Hove Albion on Saturday, told Arsenal’s website.

“The boys made a great effort here playing with for so long with 10 men after three months. So let’s recover first and then tomorrow we can start to think about that.”

Arteta said that he had left Mesut Ozil out of his squad for “tactical reasons” having picked the German playmaker regularly before the Covid-19 disruption.

“I need players in other positions so I decided to leave him out,” Arteta told reporters.

Arsenal are ninth in the league with 40 points from 29 matches.