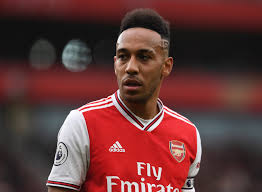 The two London-based sides are set to rekindle their rivalry at Wembley Stadium in a heavyweight clash to close out England’s domestic season.

Arsenal will be buoyed by the sharpness of Aubameyang, who scored twice against Watford on the final day of the Premier League on Sunday and finished the championship as the league second joint-top scorer with 22 goals, just one strike behind Leicester City hitman Jamie Vardy.

Luckassen is expecting big things from Auba as the Gunners look to win the first piece of silverware of Mikel Arteta’s reign.

“I think Arsenal have got a good chance because it’s a cup final and in a cup final, anything can happen,” Luckaasen told Goal on Wednesday. “They won the cup two or three years ago, so in the cup final everything is possible.

“[I’m expecting] Aubameyang and [Alexandre] Lacazette to show up, these are the two most dangerous players for Arsenal,” he added. “[Nicolas] Pepe is also a good player.

“So the three of them upfront can do something.”

“I think Chelsea have a better team right now and they did better in the league as well,” Luckassen remarked.

[Olivier] Giroud is in form, but a cup final is only one game, so anything can happen. Arsenal beat Manchester City [in the semi-final] and City are one of the best teams in the Premier League.”

There are also other reasons why the centre-back will be in the spotlight on Saturday, particularly considering he joined Arsenal from Chelsea last year.

“Arsenal’s defence is error-prone but when they played against Manchester City, David Luiz was one of the best on the day,” the former AZ Alkmaar and Ross County man concluded “I hope everybody has his best game in this final, and maybe the score can go on the side of Arsenal.

“Personally, I believe Arsenal will win.”

With three titles, 2017 champions Arsenal are the most successful club in the history of the FA Cup, while Chelsea, who won the trophy in 2018, have clinched the top prize on eight occasions.