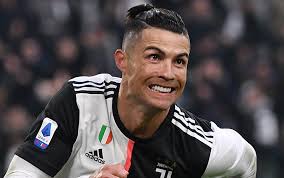 ‘Get rid of Ronaldo!’

The Portuguese has always had his critics, but he is looking increasingly frustrated in Turin with the Bianconeri out of Europe and the title race

“I know that people stand with their rifles waiting for me to miss a penalty or to fail in a decisive game,” he told La Repubblica in May 2019.

“But it is part of life and I must be prepared to accept that. And I have been prepared for many years.”

Still, there are signs that he is feeling the strain of what must feel like a barrage of criticism since Juventus’ shock last-16 elimination from the Champions League.

Indeed, it was clear that he wanted to send a message to his detractors when he pointed to his ear after completing a hat-trick at Cagliari on March 14 – just five days after the bitter Porto blow.

If he felt that would silence the naysayers, though, he has been proven sadly mistaken.

The debate over whether Juventus should retain Ronaldo for another year or try to get rid of him and his crippling pay packet has now ramped up a notch.

In the 36-year-old’s defence, he has done exactly what was asked of him since arriving in Italy in 2018, by scoring goals and boosting the Bianconeri brand.

However, Juve are still struggling, both from a financial and sporting perspective, prompting many pundits to claim that the ‘CR7 project’ has failed and should, therefore, be abandoned.

The numbers certainly are not good. Juve have not once made it past the Champions League quarter-finals since Ronaldo signed, and are now feeling the effects of the economic crisis caused by coronavirus, on and off the pitch, with the forward’s €31 million-per-annum salary only adding to their monetary woes.

Former Italy international Antonio Cassano is just one of several pundits who believes the Portuguese superstar is now a tactical problem too, utterly incompatible with the footballing philosophy espoused by coach Andrea Pirlo.

Ronaldo himself has admitted that he has streamlined his game as he has got older. He no longer dribbles as much, and contributes less in the build-up. His sole objective these days is to score goals – and he continues to excel in that regard.

Indeed, Ronaldo is presently on course to win his first Capocannoniere award, having already hit an impressive 25 goals in just 27 Serie A appearances. However, his best season since signing is proving Juve’s worst for 10 years.

They are already out of the Champions League and the Scudetto race. They face a fight just to finish in the top four in Serie A. Defeat to Atalanta on Sunday could see them fall to fifth place.

Tuttosport even claimed on Tuesday that Ronaldo would likely leave Turin if Juve miss out on Champions League football for next season, and that was just one of a plethora of stories published in the Italian press this week focused solely on Ronaldo’s future.

Right now, his every single move is being analysed – more so than at any previous point in his Juve career – and some of the conclusions are questionable.

After last weekend’s win over Genoa, it was alleged that Ronaldo had taken off his shirt and thrown it to the ground in disgust, simply because he had not scored.

He had certainly cut a frustrated figure during the game, while there was an obvious comparison to be drawn with his furious removal of the captain’s armband at the end of Portugal’s controversial draw with Serbia during the international break.

However, as Goal’s Juventus correspondent, Romeo Agresti, was quick to clarify, Ronaldo had, in fact, thrown his jersey to a ball boy.

Unfortunately, that message did not reach Pirlo before he faced the TV cameras, meaning he was left trying to defend Ronaldo’s seemingly disrespectful gesture by attributing it to his winning mentality.

“[Frustration] is part of the attitude of champions, who always want to leave their mark,” the former midfielder told Sky Sport Italia .

On Monday, the Gazzetta dello Sport claimed that Ronaldo was left so enraged by the Genoa game that he punched a wall in the dressing room afterwards – an accusation vehemently denied by the club.

The following day, La Repubblica reported that before parting company with Juventus in 2018, Massimiliano Allegri had told club president Andrea Agnelli: “Get rid of Ronaldo. He’s blocking the growth of the team.”

Over in Bergamo, meanwhile, Hans Hateboer and his accomplices were cracking up laughing after presenting Robin Gosens with a Ronaldo jersey, after the German had revealed in his autobiography earlier this month that the five-time Ballon d’Or winner had rejected a previous request to swap shirts.