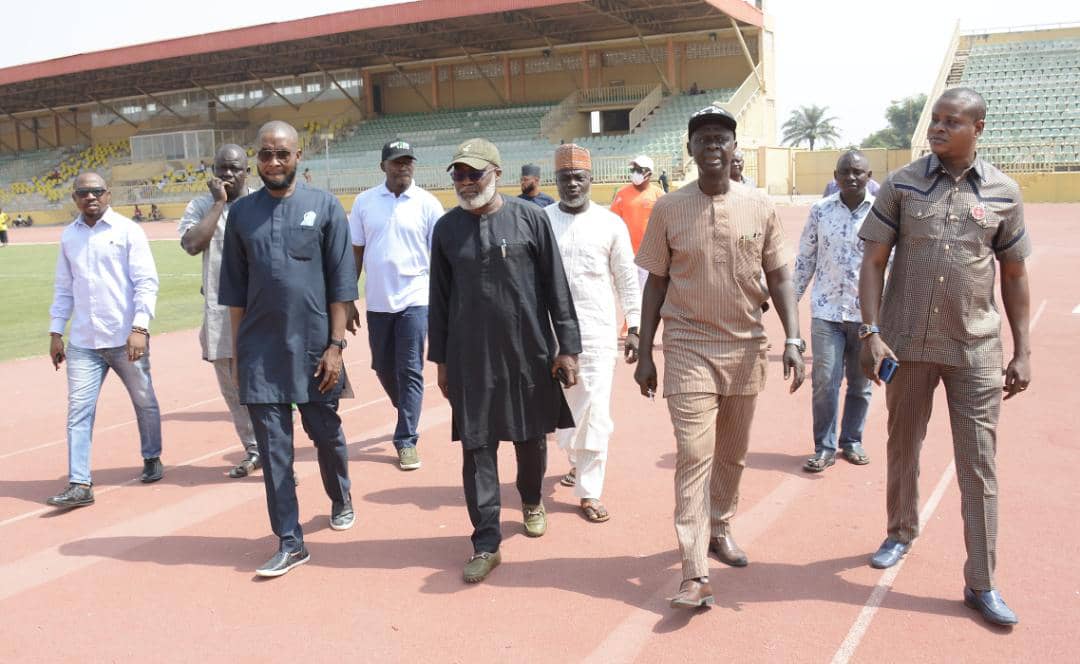 Infrastructural development is obviously and absolutely key to the growth of sports everywhere in the world, and this realization may have spurred the state government, under the leadership of Mallam AbdulRahman AbdulRazaq to start re-write the history of the state in sports with the renovation of the existing facilities, and construction of new ones.

Before now, the Baseball Park in Adewole, the twin basketball and volleyball courts, squash courts, handball courts, and lately, the Olympic size swimming pool have been renovated and modernized, while works are ongoing at the new eight-court glass back squash courts and the knock-up hall for table tennis.

Following the inspection of the Main-Bowl of the Kwara State Stadium Complex last month, and the realization that certain measures must be taken to have it approved to host the forthcoming 2021/2022 Nigeria Professional Football League (NPFL), the League Management Company (LMC) failed to grant approval for the stadium to host home matches of Kwara United Football Club.

LMC, in a letter to Kwara United Football Club, dated December 9th, and signed by the body’s Chief Operating Officer (COO), Salihu Abubakar did not grant approval for the Kwara State Stadium Complex to host matches of the NPFL for the 2021/2022 season until the synthetic pitch is replaced, alongside other conditions.

Equally, government approved the upgrading of the Olofa Stadium in Offa, with planned installation of synthetic grass at the edifice, and provision of new stands, dressing rooms, referees changing rooms, media tribune and other facilities that will qualify it to host Grade A matches.

Reform Sports West Africa Limited is a company that differentiates itself from others by drawing upon its principal’s extensive experience and professional expertise in the planning, construction, installation and development, marketing and management of recreational and leisure sports facilities.

The Chief Executive Officer of Reform Sports West Africa, Mike Adamu said that the company is reputed for using high standard products, and timely follow ups has earned it the reputation as the leader in this unique field.

According to him, it’s one of the most trusted, and reliable sports field Construction Company in Nigeria. They are currently maintaining the pitch, as well as fixing other areas highlighted by LMC that needs been improved on.

The Company will also do a follow up by replacing the surface early next year, and that would be after the total upgrading of the Olofa Stadium in Offa Local Government Area of the state.

Kwara state government said that plans to replace the Kwara stadium grass had been captured in the 2022 budget; while plans are also on to have stadium in both the Northern and Southern part of the state.

The Executive Chairman of the State Sports Commission, Mallam Bola Mogaji explained that the state government is determined to have a FIFA standard football pitches across the three Senatorial districts to lessen the pressure on the existing stadium in Ilorin.

Mallam Magaji, who commended the state Governor, AbdulRahaman AbdulRazaq for listening to the yearnings and aspirations of football lovers, believed that the contractors engaged to handle the project will deliver on time and according to specifications.

The formal laying of the foundation stone of the Stadium Complex and unveiling of the plague in commemoration of the foundation laying were performed by the Military Governor, Col Innih on April 16, 1977. And the stadium has since then gone through various forms of renovations and upgradings, with the major ones been witnessed under the administration of Mallam AbdulRahman AbdulRazaq as Governor.

At the time the pitch was being replaced in 2010, Kwara United Football Club played some of the 2010/2011 season matches in Offa and Shagamu, Ogun State.

The team first relocated to the Oloffa Stadium, Offa, and due to inadequate management of the pitch, relocated to Gateway International Stadium, Shagamu, Ogun State.

Offa is a city located in the Kwara South Senatorial District of Nigeria, and the second largest town in Kwara State.

The Oloffa Stadium, located along Irra Road in Offa was declared fit to host League matches in March 1992, by the then Secretary-General of the Nigeria Football Association (now Nigeria Football federation), Mr. P.O.C. Achebe, when he personally visited the stadium for inspection.

The stadium has been renovated and upgraded several times since then, until it was cleared to host both Kwara United FC and Bukola Babes Football Club Premier League matches again, ahead of the 2010/2011 season.

Following the current interventions by Governor AbdulRahman AbdulRazaq, few months from now, the Stadium will again, host Kwara United FC matches and other Grade A encounters after the upgrading is completed. Reform Sports West Africa CEO, Mike Adamu said that the upgrading will commence on December 27th, and will last for between 12 to 16 weeks.

On the Kwara state stadium, Adamu said that maintenance process had already started in some parts of the Main-Bowl, noting that all areas identified by the League Management Company (LMC) that needs been attended to will be put to proper shape ahead of the commencement of the 2021/2022  league season.

Adamu stressed that his outfit, which has been in Nigeria for over 15 years had successfully handled projects at stadiums in Bauchi, Oyo, Enugu and other states, with support from its technical team in Turkey.

In Offa, during the inspection of the Olofa Stadium by a combined team of the Kwara State Sports Commission, Kwara State Football Association, Kwara United FC and Reform Sports West Africa, the Olofa of Offa, His Royal Majesty, Oba Mufutau Gbadamosi Oloyede Okikiola Esuwoye II praised the state government for the gesture, even as he sought for the inclusion of a training pitch among the packages.

The TIC Chairman of the Local Government Area, Jare Olatundun also thanked the Governor, Mallam AbdulRahman AbdulRazaq for the consideration, adding that it will open new windows of opportunities for Offa and Kwara State.

He added that the Local Government will maximize the opportunity by also galvanizing support from indigenes of the community both at home and in the Diaspora, to build other sporting facilities at the Complex.

Already, The League Management Company (LMC) has granted the Kwara State Stadium Complex a provisional approval to host the home matches of Kwara United Football Club, within the framework of the NPFL 2021/2022 season.

The body, in letter dated December 14th, 2021, and signed by the Chief Operating Officer (COO), Salihu Abubakar, stated that the approval is conditional on the premise that the workload and programs in the stadium, especially the pitch would be reduced, and constantly maintained.

According to LMC’s letter, “we have noted the amount of emergency work done to address the lapses enumerated, and also note that the Kwara state government immediately awarded the contract for the replacement of the pitch as well as that of the satellite stadium in Offa, which will serve as alternative venue when work starts on the Ilorin stadium.

“We envisaged all these processes will be concluded within the first quarter of 2022 and before the conclusion of first round matches.

“Consequently, a provisional approval is hereby granted for Kwara stadium to host Kwara United FC matches within the framework of the NPFL 2021/2022 season.

LMC however, warned that the pitch must be constantly maintained to keep it fit for purpose until the new pitch is installed, adding that it will continue to monitor proceedings.

“We will continue to monitor the stadium as well as others to ensure that standards are met and maintained.