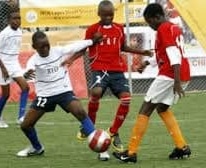 The boys are gradually being separated from the men in the battle for supremacy at the ongoing 18th edition of the Chief of The Naval Staff and NOWA Competitions in Abuja.

Kwara state are on the verge of qualification after beating Cross River and the Nigerian Police Youth teams 3-0 respectively.and a 2-2 draw against Kogi has given them hope irrespective of the outcome of other matches.

Defending champions, the Agbana Youths of Ekiti have also survived the scare of enterprising Gombe and Zamfara state youth teams, thrashing them 3-0 and 2-0 respectively, then recording 1-1 draw against Kaduna.

The most heartwarming of them all according to pundits is the performance of the Nigerian Navy Youth team who are qualifying for the quarter-finals for the second time in the history of the tournament. The team defeated  Taraba 4-0 Nigerian Airforce 1-0.

The outcome of their match against Enugu will determine whether they will top the group or remain second.

For the girls, it is even tougher, the Navy U-17 team could not muster enough courage. They lost all their matches to Imo, FCT and Ekiti.

The major contenders for the trophy are Kwara and Imo girls. Although Ekiti girls still have a chance, the outcome of the match  between  Airforce girls and Kwara will give a clearer picture. However, the groups still remain open.

As we head towards the melting point, the teams are preparing for their last group games.and quarter- final matches, no doubt, tension is already mounting and the fireworks will be hotter. since the contending teams have vowed not to leave anything to chance
By Paul Akhagbemhe