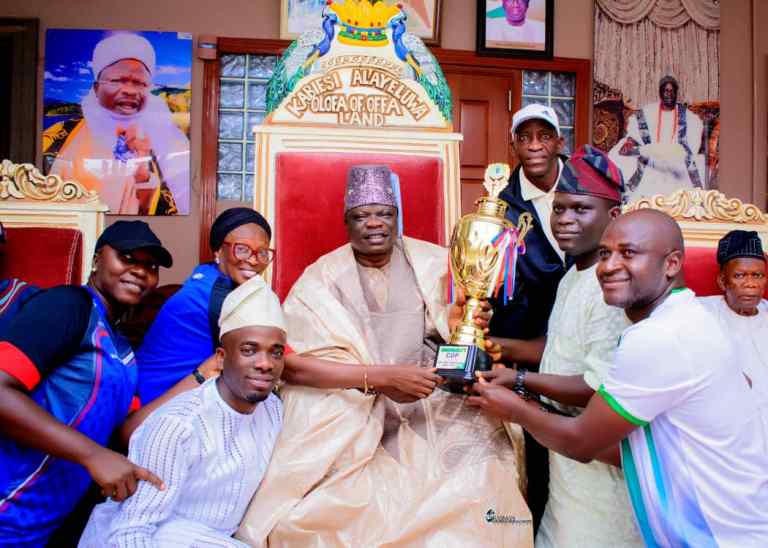 The Offa Honorable’s Cup football competition being sponsored by Hon. Yusuf Abdulwaheed Gbenga, member representing Essa/Shawo/Igboidun Constituency at the Kwara State House of Assembly received a boost during the weekend, with the commendation by the Oloffa of Offa, HRM Oba Mohammed Mufutau Gbadamosi Esuwoye11.

Oba Mufutau Gbadamosi, while receiving the trophy for the competition, commended Hon. Yusuf for his philanthropy and commitment to development of the youth, while also enhancing the economic potentials of the community.

Hon. Yusuf, while presenting the trophy to the Oloffa, said he is sponsoring the tournament to further demonstrate his passion and love for the game of football.

Hon. Yusuf also pointed out that football development from the grassroots needs to be fully supported as the likes of late Rashidi Yekini, Dele Aiyenugba and Taiwo Awoniyi were products of grassroots football.

The competition, which started on Friday will feature 32 teams from Offa, Ilorin, Osogbo and Ibadan.

According to the Coordinator of the event, Adebisi Muideen Adegoke, he said two teams are being expected from Ilorin, one from Ibadan and another from Osogbo.

”So far, 10 teams have participated in the preliminary stages which is on-going at the Oloffa Stadium, and the tournament has been going on smoothly,” Adebisi added.
The competition is being organised by the Offa chapter of the Youth Sports Federation of Nigeria (YSFON).